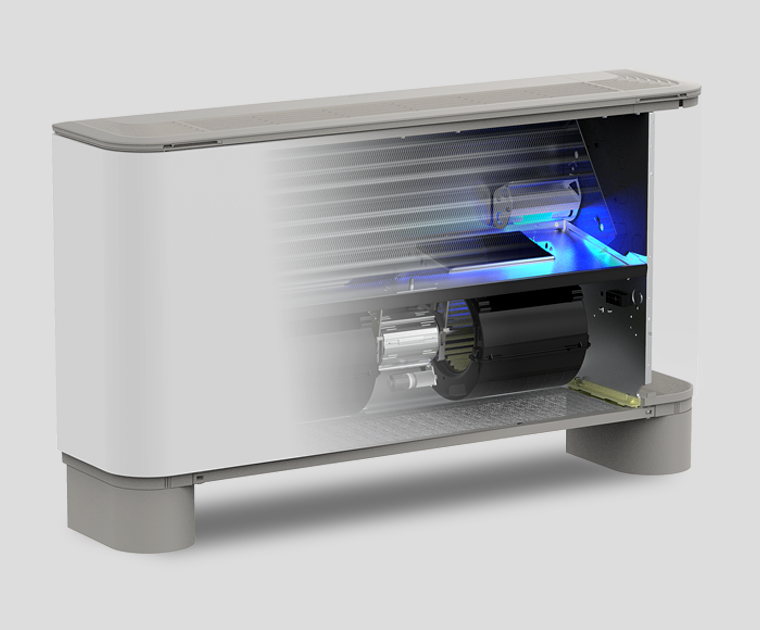 The pandemic caused by the coronavirus COVID-19, that has hit all the countries of the world albeit at different moments, has made it even more necessary to adopt solutions (in terms of both content and management) for preventing or limiting the spread of this type of infection.

The organisational measures currently recommended for actively reducing the risk of contagion involve, for instance, an increase in the external air flow rate (diluting effect), avoiding a situation where the return air from different rooms is mixed, and keeping the specific ambient humidity above 40%. But there are solutions that limit the spread of this type of virus even more, guaranteeing optimum sanitisation of the indoor air.

With regards the use of a common fan coil that recirculates the air in a single room, there is no evidence of an increased risk for the people in the room in the present conditions.

It can, on the contrary, become an active prevention measure if fitted with sanitising devices such as the one with a UV lamp that has a photo-catalytic effect.

To meet these requests, Aermec has come up with the new FCZ_H and FCZI_H range with a state-of-the-art germicidal device containing a photo-catalytic germicidal lamp.

Based on the FCZ line (one of AERMEC’s flagship fan coil products), the FCZ_H range combines the well-known features of quiet operation, reliability, low electricity consumption and elegant design with the specific sanitising action of the photo-catalytic system.

There are various ways of controlling the presence of micro-organisms – viruses, bacteria, etc. – inevitably and naturally found in the air, preventing them from exercising a negative effect on the people in the room:

Micro-organisms are captured in filtering systems that require suitable components in order to be effective with small organisms (that can be measured in microns or tenths of a micron – typical of viruses). These are rarely present in standard system components like fan coils and, in any case, don’t always fulfil the second phase (removal of the micro-organisms, which remain alive).

The FCZ_H with a germicidal photo-catalytic lamp uses photocatalysis with irradiation – the method that has proven to be the most suitable for systems with terminals, and that guarantees the inactivation of viruses, mould, bacteria, etc. The UVC lamp (with 220-300 nm wavelength) irradiates a surface in titanium dioxide (TiO2) – a material that triggers the powerful ionisation of the water vapour in the air in ions OH- and H3O+, along with the formation of H2O2 molecules that attack the micro-organisms and inactivate them, destroying their DNA and breaking down the other harmful molecules.

In particular, considering that the dimensions of nebulisers which could contain formidable viruses like COVID 19 range from 80 Nm to 160 Nm (on average 0.1 micron), they’re hard to capture with traditional filters but are highly vulnerable to the photo-catalytic device fitted in the FCZ_H, which ensures a notable abatement of the viral load. Of course, it’s impossible to completely eliminate the germs, bacteria and viruses from a room (asepsis) by just using a fan coil, but the abatement of the virulent charge means a considerable reduction in exposure to contagion.

The ionising effect is local (on the air flow) and the irradiation of the UVC lamp is perfectly shielded, so the device is entirely harmless and has no effect on the people in the room.

The FCZ_H range is available in both the on-off version and a version with inverter technology, both suitable for vertical or horizontal installation, either exposed or ducted. The latter version also comes with a boosted motor. Cooling capacity from 0.8 to 8.6kW, heating capacity from 2 to 17.1kW.